The 4 seasons, based on the famous Vivaldi’s violin concertos, is a family orientated commission of the Greek National Opera and LIDL Hellas to Patari Project theatre group in cooperation with Nikos Galenianos. The plot finds the 4 seasons at the four points of a circular set, quarreling about which one is the best. Inside the set is the ensemble of the 5 musicians, which stands for the world’s heartbeat. The ensemble plays whatever the seasons instruct and often gets interrupted because they are not satisfied by what they play. Gradually the musicians warn the seasons that, If they do not all cooperate, the world will collapse.
The music is based on Vivaldi’s concertos. Sometimes it is re-arranged, sometimes fragmented, in the form of scattered motives. There are also original compositions, controlled improvisations and vocal interventions of the actors, who often discuss with the ensemble, that responds purely musically. The ensemble consists of four baroque instruments and an accordion, which adds the missing “sonic volume” and color when necessary. The total result resembles to a continuum of sound and images, a kind of colorful installation, with a clear dramaturgical direction. 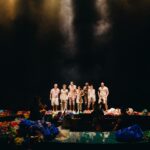 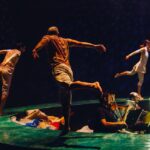 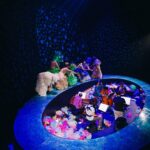 Commissioned by the Greek National Opera